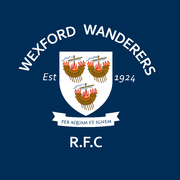 At a general meeting on 7 th October 1924 Wexford Wanderers Rugby Football Club was formed. Most of the attendance at the meeting that evening in White’s Hotel had previously been members of Wexford Football Club, founded in 1887, which had ceased to field in the 1921-22 season.

The first President, B Hickey was a prominent veterinary surgeon. He was followed by businessman JJ Stafford, who served for 4 years. In 1930 solicitor MJ O’Connor took over. All were successful local businessmen and professionals.
In those early days the same names of those involved in the rugby club also crop up on the committee of the Boat Club and on the organising committees for regattas, horse racing and athletics meetings. The players in the 1920s all appear on the team lists for cricket and hockey and in
the tennis, badminton and golf tournaments and regattas in south Wexford.

The influential players in the first decade were mostly from farming backgrounds in the hinterland or from medical or legal and business families in Wexford town. The original Wexford club had a monopoly of rugby in its first 25 years, but competition for new and promising players arose when Enniscorthy rugby club was formed in 1912. Enniscorthy were the dominant junior club in Leinster throughout the 1920s and affected the Wexford club in two ways. Firstly, as the leading club in the South East they attracted players to play with them but, secondly, on a more positive note, they set very high standards in 1924 for the newly formed Wexford Wanderers club.

Some of the players would have been teachers, bankers and others transferred into the area as part of their work, but most were local chaps who had learned their rugby while away at school or University. The extensive rail network allowed young lads to travel easily and most of the players
had been away at secondary school. While some went to Wales or England, the majority stayed relatively local and went to Newtown School in Waterford, Kilkenny College, Clongowes Wood in Kildare, Dublin’s Wesley, Blackrock and Terenure Colleges or, closer to home, to Mount St Benedict
College, outside Gorey. Unusually, one of the most prominent players in the late 20s was Toddy Pierse, from a medical (and sporting) dynasty in the town, who went on to Captain the club and served as President many times right into the fifties. He had attended St Peter’s College, in Wexford
Town, and UCD and was an accomplished Gaelic footballer, winning an all-Ireland with Dublin and captaining UCD to Sigerson glory, before switching to rugby.

All sports were thriving in the Ireland of the 1920s and other clubs founded in that decade included Malahide and the reformed Naas in 1922, Mullingar, CYMS and the reformed Suttonians club in 1924, Balbriggan and Navan in 1925, Skerries in 1926 and North Kildare in 1928

Closer to home, two more clubs were founded at the end of the 1920s – Rosslare Harbour and the Anzacs. Both clubs played in the provincial Towns Cup and were moderately successful, although neither of them survived into the post war period. A team from Baldwinstown also briefly took the
field for some matches in 1930. In the early years Wexford played in Wexford Park, then a municipal pitch, before it became an exclusively GAA ground. As well as Gaelic games and Rugby, other sports played there included Hockey, Athletics, Boxing and association football. The club subsequently played at Bettyville (site of the present racecourse), Park, Crosstown and Killiane Castle. The club finally settled in at Park which
had hosted Association Football club Wexford Bohemians, purchasing the land in the 1950s and subsequently extending the site to three pitches in 1980. Floodlights were installed at the end of the 1980s and for some years a very successful mid-week floodlit tournament – for the Ted Doyle trophy
– was held.

Eugene McCarthy played for the 1 st XV as hooker throughout the 1930s. He owned Whites Hotel in Wexford town and it became the clubhouse for many years. The club pavilion was opened in 1974 and has been extended and remodelled a number of times since. There has always been a close bond between the club and the town. Eugene McCarthy was on the original committee that led to the founding of Wexford Festival Opera. The contribution of the Staffords, Scallans and O’Connors was immense and the names of Kelly, Hadden, Corcoran, Hamilton, Pierse, Coffey, Doyle, Walsh, Corish and Hanton – among many others – were, and still are, prominent in the town, Cricket has been played extensively over the years in South Wexford, particularly in the 1920s and 30s when there were Cricket Leagues across rural townlands and parishes. Popularity waned over the years until 1976 when, James O’Connor, Alan Lynch and Ted Doyle reformed the club and it was then led so successfully by Niall McConnell, who was President for 19 years. And it has been part of Wexford Wanderers since then.

The club won the Provincial Towns Cup in 1930 when, captained by Tom Walsh, they beat Athy 6-3 in Lansdowne Road. Over the years the club has won trophies and pennants at junior and youth levels but a second Provincial Towns Cup has proved to be elusive. There have been three other final
appearances – in 1941 Frank Pettit, a hugely talented rugby player, singer, and golfer captained the team that lost 7-5 to Skerries, again in Lansdowne Road. The 1960s were to be a very successful decade for the club but again that second win proved elusive. In 1960 Hugh Latimer’s team lost 17-8
to Tullamore, in Kilkenny and in 1966 a Paddy Doris led team lost 8-3 to Navan in the final, played in Athy. In the meantime the club got to their only Towns Plate Final in 1965, losing to Skerries. The Dunne Cup was won on three occasions, with two losing final appearances, and the Culliton Cup
on one occasion.